Hefty Monetary Penalties – Accompanied by the Possibility of No Prison Time

The legal saga involving the civil and criminal cases against the entity and former individual owners of the Bitcoin Mercantile Exchange, or BitMEX—a large and well-known online trading platform dealing in futures contracts and other derivative products tied to the value of cryptocurrencies (see here, here, and here)—continues unabated.

Most recently, BitMEX co-founder and former CEO, Arthur Hayes, a high-profile leader in the cryptocurrency industry, settled his civil charges with the CFTC and pleaded guilty to criminal charges brought by the DOJ.  He now faces sentencing in the criminal case, currently scheduled for the end of this week.  As we will discuss, Hayes and the government take very different views regarding his appropriate sentence.

These cases emerged publicly in October 2020 when: (1) the Commodity Futures Trading Commission (“CFTC”) filed a civil complaint against the entities operating the BitMEX trading platform and its three individual owners for allegedly failing to register with the CFTC and violating various laws and regulations under the Commodity Exchange Act (“CEA”); and (2) the Department of Justice obtained an indictment against the three individual owners and another individual, including Hayes, charging each with violating, and conspiring to violate, the Bank Secrecy Act (“BSA”) by failing to maintain an adequate anti-money laundering (“AML”) program.

The cases have raised novel legal questions concerning which, if any regulatory regimes, apply to participants in the cryptocurrency market.  Moreover, Hayes’ upcoming sentencing raises the question of whether an offense is so novel that it can merit probation, despite the high dollar value of the alleged scheme at issue.…

END_OF_DOCUMENT_TOKEN_TO_BE_REPLACED

Questions of which, if any, regulatory regimes apply to the variety of participants in the cryptocurrency market continue to dog the industry.  On February 28, 2022, whether a cryptocurrency futures trading platform constitutes a “futures commission merchant” (“FCM”) under the Commodity Exchange Act (“CEA”) subject to Bank Secrecy Act (“BSA”) regulations took center stage in a U.S. District Court decision denying a motion to dismiss an indictment alleging violations of the BSA against the founders and chief executives of BitMEX.

As we will discuss, the District Court for the Southern District of New York rejected a motion to dismiss the indictment, in which the defendants argued that they lacked notice under the Due Process Clause of the Fifth Amendment that they could face criminal charges based on two technical questions, the answers to which were “unknowable” at the relevant time: (1) whether Bitcoin is a “commodity;” and (2) was BitMEX an FCM brokering cryptocurrency futures.
END_OF_DOCUMENT_TOKEN_TO_BE_REPLACED BitMEX will pay regulators up to a combined $100 million civil monetary penalty; perform a “lookback” regarding the potential need to file additional Suspicious Activity Reports (“SARs”); and hire an independent consultant to conduct two reviews of BitMEX’s operations, policies, procedures, and controls, in order to confirm that BitMEX is not operating in the U.S., and that no U.S. customers are able to trade with the BitMEX platform.

According to the government filings, BitMEX is one of the oldest cryptocurrency derivative exchanges, with 1.3 million user accounts and a collection of annual fees in excess of $1 billion.  Combined, the government filings allege that for a period of six years between November 2014 and October 1, 2020, BitMEX offered trading of cryptocurrency derivatives to retail and institutional customers in the U.S. and worldwide through BitMEX’s website. Customers in the U.S. placed orders to buy or sell contracts directly through the website and BitMEX was aware that U.S. customers could access the BitMEX platform via virtual private network (“VPN”).

The civil penalty will be split between FinCEN and the CFTC.  However, the settlement involves an interesting “carrot” offered by the regulators:  $20 million of the penalty is suspended pending the successful completion of the SAR lookback and the two independent consultant reviews.

According to the government’s allegations, BitMEX deliberately ignored for years the most basic AML requirements, resulting in multitudinous violations and inviting – and even encouraging – its customers to launder illicit funds.  As we will describe, the government has alleged that BitMEX operated on the announced pretext that it was not subject to the BSA or U.S. commodities laws because it had no U.S. customers or operations, when senior management knew otherwise.
END_OF_DOCUMENT_TOKEN_TO_BE_REPLACED

Incorporating in the Seychelles but Allegedly Operating in the U.S. Spells Trouble for Company and its Founders

The Bitcoin Mercantile Exchange, or BitMEX, is a large and well-known online trading platform dealing in futures contracts and other derivative products tied to the value of cryptocurrencies. Recently, the Commodity Futures Trading Commission (“CFTC”) filed a civil complaint against the holding companies that own and operate BitMEX, incorporated in the Seychelles, and three individual co-founders and co-owners of BitMEX for allegedly failing to register with the CFTC and violating various laws and regulations under the Commodity Exchange Act (“CEA”). The 40-page complaint alleges in part that the defendants operated BitMEX as an unregistered future commission merchant and seeks monetary penalties and injunction relief.

In a one-two punch, the U.S. Attorney’s Office for the Southern District of New York on the same day unsealed an indictment against the same three individuals, as well as a fourth individual who allegedly served various roles at BitMEX, including as its Head of Business Development. The indictment charges the defendants with violating, and conspiring to violate, the requirement under 31 U.S.C. § 5318(h) of the Bank Secrecy Act (“BSA”) that certain financial institutions – including futures commissions merchants – maintain an adequate anti-money laundering (“AML”) program.

Both documents are detailed and unusual. This appears to be only the second contested civil complaint filed by the CFTC based on the failure to register under the CEA in connection with the alleged illegal trading of digital assets (other than those for which settlement orders were entered into with the CFTC). The first such complaint was filed only a week prior against Latino Group Limited (doing business as PaxForex), but the BitMEX complaint has garnered more attention in light of BitMEX’s reputation and size. Most of the CFTC’s prior actions against digital asset companies involved claims for fraud or misrepresentation in the solicitation of customers. This complaint, against a relatively mature and large digital asset company, demonstrates that the CFTC continues to actively pursue trading platforms and exchanges that solicit orders in the United States without proper registration. In addition to failing to register, the complaint alleges that the defendants failed to comply with the regulation under the CEA, 17 C.F.R. § 42.2, which incorporates BSA requirements such as an adequate AML program.

The indictment is unusual because it charges a rare criminal violation of Section 5318(h) – the general requirement to maintain an adequate AML program. Although indictments against defendants involved in digital assets are increasingly common, this also appears to be the first indictment combining allegations involving the BSA, digital assets, and alleged futures commissions merchants.

The complaint and the indictment share the common theme that the defendants attempted to avoid U.S. law and regulation by incorporating in the Seychelles but nonetheless operating in the United States. The opening lines of the CFTC complaint declare that “BitMEX touts itself as the world’s largest cryptocurrency derivatives platform in the world with billions of dollars’ worth of trading each day. Much of this trading volume and its profitability derives from its extensive access to United States markets and customers.” Meanwhile, the indictment alleges that defendant Arthur Hayes – a Fortune “40 Under 40” listee – “bragged . . . that the Seychelles was a more friendly jurisdiction for BitMEX because it cost less to bribe Seychellois authorities – just “a coconut” – than it would cost to bribe regulators in the United States and elsewhere.”…
END_OF_DOCUMENT_TOKEN_TO_BE_REPLACED

Leaders of FinCEN, CFTC and SEC Attempt an Intricate Dance of Competing Oversight of Virtual Currency

On October 11, the leaders of the Financial Crimes Enforcement Network (“FinCEN”), the Commodity Futures Trading Commission (“CFTC”), and the Securities and Exchange Commission (“SEC”) issued a “Joint Statement on Acitivites Involving Digital Assets” in order to “remind persons engaged in activities involving digital assets of their anti-money laundering and countering the financing of terrorism (AML/CFT) obligations under the Bank Secrecy Act (BSA).”  The regulation of cryptocurrency has been a constant topic of this blog.
END_OF_DOCUMENT_TOKEN_TO_BE_REPLACED 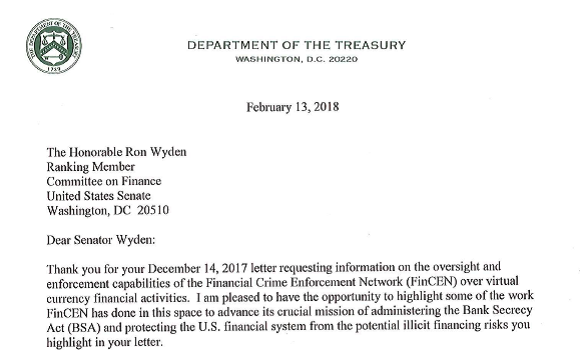 As we previously have blogged, the Financial Crimes Enforcement Network (“FinCEN”) became one of the first regulators to wade into the regulation of cryptocurrency when it released interpretive guidance in March 2013 stating that an administrator or exchanger of virtual currency is a Money Services Business (“MSB”). As a MSB, and according to FinCEN, an administrator or exchanger of virtual currency therefore is a “financial institution” subject to the Bank Secrecy Act (“BSA”) and its various AML-related requirements, unless a limitation or exemption applies.  Accordingly, the Department of Justice has prosecuted operators of cryptocurrency exchanges for a failure to register with FinCEN as a MSB, and FinCEN has brought civil enforcement proceedings against such exchanges for alleged failures to maintain adequate AML programs and file required Suspicious Activity Reports (“SARS”), among other alleged BSA violations.

But there is a potential problem with all of these regulators simultaneously rushing in to assert their respective power over cryptocurrency businesses, and it is a tension that does not seem to have attracted much public attention to date. Specifically, BSA regulations pertaining to the definition of a MSB, at 31 C.F.R. § 1010.100(ff)(8)(ii), flatly state that a MSB does not include the following:

How can certain cryptocurrency businesses be subject to the claimed jurisdictions of FinCEN as well as the recent regulatory newcomers to this area, the SEC and the CFTC?
END_OF_DOCUMENT_TOKEN_TO_BE_REPLACED This week, the U.S. Senate Committee on the Judiciary and the U.S. Senate Committee on Banking, Housing and Urban Affairs held hearings focused in part on Anti-Money Laundering  (“AML”) and the Bank Secrecy Act (“BSA”).  We discuss highlights of the testimony of the Chairpersons of the Securities and Exchange Commission (“SEC”) and the Commodity Futures Trading Commission (“CFTC”), as well as testimony from a senior official at the Justice Department and a representative of the U.S. Chamber of Commerce, concerning upcoming changes to beneficial ownership requirements and the current regulatory landscape of the cryptocurrency industry.
END_OF_DOCUMENT_TOKEN_TO_BE_REPLACED