In our next post, we will turn from regulatory requirements to enforcement actions, and explore some recent high-profile civil forfeiture actions by the Department of Justice — at least some of which may have been fueled by information obtained through GTOs — involving real estate and alleged foreign corruption.  Under any scenario, these forfeiture actions confirm the U.S. government’s sustained focus on real estate as a mechanism for money laundering.

The GTOs:  The Basics

First, some background.  The stated purpose of the GTOs is to try to close loopholes in the current AML regime, and identify bad actors who may be laundering money and concealing their identities through the use of legal entities, such as shell companies, and avoiding the BSA/AML systems of banks by conducting all-cash real estate deals with no loans.

As the Report notes, the BSA includes “persons involved in real estate closings and settlements” in its definition of a “financial institution” subject to the BSA. However, despite issuing in 2003 an advance notice of proposed rulemaking on AML programs for persons involved in real estate closings and settlements (a group which could include attorneys), FinCEN never issued final regulations – except for finalizing a rule in 2012 which required nonbank residential mortgage lenders and originators to establish AML programs and file Suspicious Activity Reports (“SARs”). According to the Report, “[t]his rule subjected the majority of residential real estate transactions to BSA/AML protections and safeguards.”  But a major gap remained: residential purchases done without loans.  Thus the GTOs.

FinCEN has issued a series of GTOs since 2016; each GTO has been effective for a period of six months.  On May 8, 2020, FinCEN issued its most recent GTO regarding certain real estate transactions. Specifically, these GTOs require U.S. title insurance companies to identify the natural persons behind legal entities used in purchases of residential real estate performed without a bank loan or similar form of external financing.  The current monetary reporting threshold is $300,000.  The GTOs now broadly cover purchases involving virtual currency as well as “fiat” currency, wires, personal or business checks, cashier’s checks, certified checks, traveler’s checks, a money order in any form, or a funds transfer.  Nine jurisdictions are currently covered by the GTOs.

Purchases made through publicly traded companies are excluded, because their beneficial owners are identifiable through business filings.  As the Report notes, one tactic for a bad actor to evade a GTO filing is simply to forego title insurance when making a purchase.

The Report explains that for each GTO renewal, FinCEN assessed the percentage of reported transactions involving a legal entity, purchaser representative, or beneficial owner who was separately the subject of a filed SAR. FinCEN found that the percentage varied across time and geographic area. The GTO filings sometimes helped identify potential suspects of interest for further investigation and led to law enforcement referrals.  Thus, the current GTO represents a progression of expanding coverage since the first GTO issued by FinCEN, as reflected by this graphic in the Report regarding changes over time: Findings of the Report

The Report, compiled at the request of the U.S. Senate Judiciary Committee, Subcommittee on Crime and Terrorism, summarizes its conclusions as follows:

Unlike prior GTOs, which FinCEN officials said they issued at the request of and with the involvement of law enforcement agencies, FinCEN issued the real estate GTO on its own initiative.  Thus, FinCEN had to take the lead in implementing and evaluating the GTO but lacked detailed documented procedures to help direct the GTO’s implementation and evaluation – contributing to oversight, outreach, and evaluation weaknesses.  For example, FinCEN did not begin examining its first title insurer for compliance until more than 3 years after issuing the GTO and did not assess whether insurers were filing all required reports. Similarly, while FinCEN initially coordinated with some law enforcement agencies, it did not implement a systematic approach for outreach to all potentially relevant law enforcement agencies until more than 2 years after issuing the GTO.  FinCEN also has not yet completed an evaluation of the GTO to determine whether it should address money laundering risks in residential real estate through a regulatory tool more permanent than the GTO, such as a rulemaking.  Strengthening its procedures for self-initiated GTOs should help FinCEN more effectively and efficiently implement and manage them as an anti-money laundering tool.

FinCEN responded to the Report in part by noting that its newly-created Global Investigations Division is in the process of reviewing and revising the GTOs’ standard operating procedures.

The Use of GTOs by Law Enforcement

Not surprisingly, law enforcement representatives reported to the GAO that GTO filings provided information which sometimes initiated investigations, or more likely, provided a “secondary source” of information to assist ongoing investigations.  More specifically, law enforcement representatives told the GAO that, in addition to serving as investigative leads, information from GTO filings assisted in identifying assets for seizure or forfeiture; using the underlying documents associated with a GTO filing as evidence in support of prosecutions; and “strategic analysis” — that is, the identification of patterns or trends in illegal activity.  One example of such strategic analysis was that law enforcement agents were “able to associate GTO reporting with foreign actors, SAR activity, and high-risk AML typologies otherwise not found in the original GTO filings.” Officials also have been tracking which title insurance companies were filing the most GTO reports.

The Report contains the following graphic regarding potential use of GTO data by law enforcement: 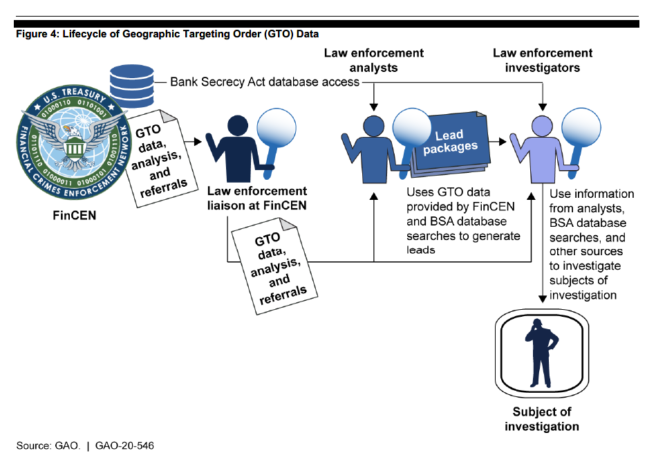 Some law enforcement representatives told the GAO that it was too early to assess fully the usefulness of the GTOs, because the amount of data received has been enormous — all of which takes significant time and resources to analyze — and the true value of information cannot be assessed until the end of investigations, which can take years to complete.  Nonetheless, some law enforcement representatives generally supported making the GTO requirements permanent, because the GTOs generated investigative leads and acted as a general deterrent against money laundering.

The Report observes that the GTOs attempt to address a major problem in AML and money laundering enforcement:  the fact that, currently, many states do not require beneficial ownership (“BO”) information when legal entities are formed, coupled with the use of shell companies by bad actors to disguise beneficial owners.  This combination can stymie law enforcement, particularly when there are layers of entities.  As the Report notes, a national registry regarding the beneficial owners of legal entities has been proposed repeatedly by Congress, and such legislation may yet pass.

The legislation which has been proposed regarding a national registry of beneficial owners share the following general requirements:

The Report states that government officials who spoke with the GAO generally supported such legislation in order to close AML enforcement loopholes.  Not surprisingly, small business groups opposed such a registry, citing compliance costs.  The American Bar Association has expressed concerns over invasion of the attorney-client privilege. The Report poses the question:  if a beneficial ownership registry was passed into law, would the GTO requirements — either in the form of continued GTOs, or final regulation — still be necessary?  Again, and perhaps not surprisingly, law enforcement representatives supported the simultaneous existence of a national registry and GTO requirements, because (1) the absence of GTO requirements would make it harder to “connect the dots” and link beneficial owners to their real estate purchases; and (2) a national registry may not apply to foreign entities.  Although the Report conceded that a dual regime would impose additional costs, it also stressed that the Financial Action Task Force has concluded that a multi-pronged approach to fighting the misuse of legal entities is more effective.

According to the Report, FinCEN has not yet evaluated the GTOs to determine next steps and whether to impose AML program and reporting requirements on real estate professionals, including real estate agents and attorneys.  Real estate industry representatives and “AML experts” who spoke to the GAO provided “mixed views” on whether AML requirements should extend to real estate professionals.  One expert cautioned that the real estate industry is large and de-centralized and ill-equipped for such requirements, and that it would be difficult for a federal regulator to effectively conduct examinations across the industry.  One industry group told the GAO that real estate agents have limited ability to identify suspicious activity because they are not involved in the financing of purchases.  Conversely, another industry group told the GAO that real estate agents and lawyers should be the subject of any AML requirements because they are much more involved with buyers and transactions than title insurers.  The outcome here is far from clear and it appears that FinCEN is still assessing and perhaps waiting to see if beneficial ownership registration legislation passes before deciding whether to propose AML regulation regarding the real estate industry.

In our next post, we will switch from discussing regulatory requirements to concrete enforcement actions, by exploring some recent high-profile civil forfeiture actions by the DOJ involving real estate and alleged money laundering and foreign corruption.